We had a good sleep at Rieveley’s Hut and didn’t start quite as early. The kids had a fantastic sleep from 9 PM until 820 AM.  I was up at 715 AM and read my book which was really great because I was motivated to finish it to shed 1 lb off the pack weight.  I assumed I’d find one in another hut to trade. 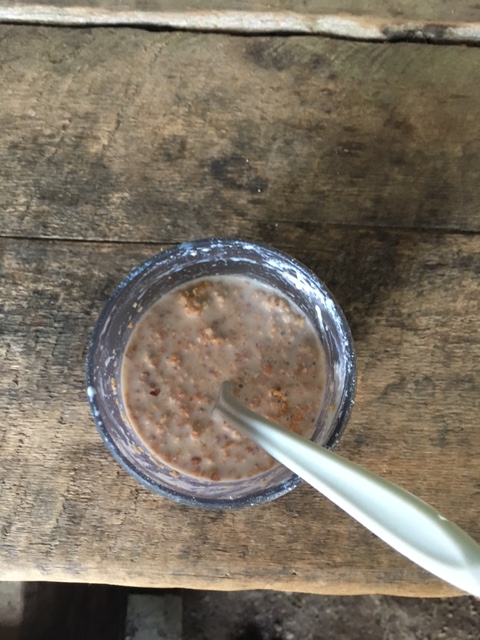 After having our second day of cereal we were ready to roll but not before the kids rated the cereal meal.  They said it was a bit creamy and salty.  To me, it was fantastic and loaded with calories so it would last longer on the trail.  The other bonus is that we did not carry the stove or fuel for the first 40 km of our hike.  I left that in food drop #1.

Their food ratings have grown in sophistication and they are truly constructive.  I listen and try to alter the line-up both on the trail and at home.

The hike was easy through to km 40 and this section was really beautiful.  The temperature at the start of our hike was perfect for hiking and the air felt fresh.  It is one of my favourite sections of the trail.  It winds through beautiful forest and you are away from the logging.  There are waterfalls and creeks at several points.

There were several great bridges that we crossed.  In hindsight we could have lingered a bit more around the waterfalls.  With the heat the cool water was beckoning but we had a big day of 23 km with a break for a proper meal at the pub so we forged ahead.

We learned to love the km signs on the trail.  When you get into a groove hiking you can almost sense when a km sign is coming.  The kids would always yell out the number when they saw a sign. 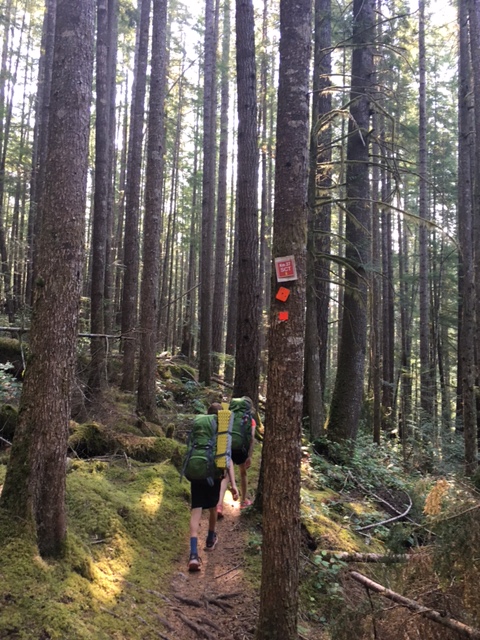 We stopped at Thethyeth Lake to sample the water temperature.

After stopping at the Lake briefly we headed up a pitch to the Kayach Bluff. 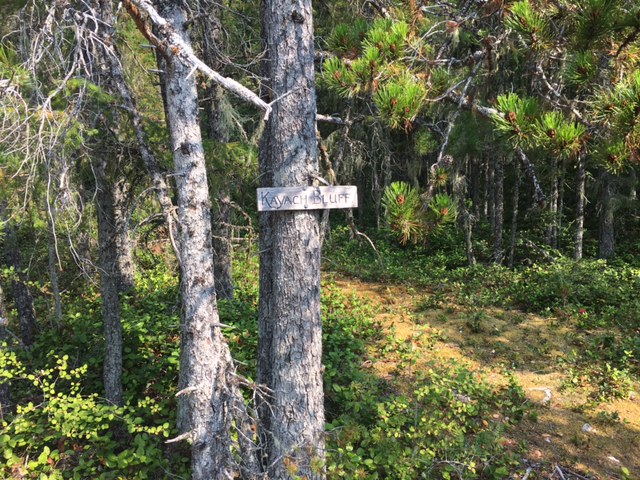 I was feeling really good hiking because the pack had gotten quite light once we ate the 1 kg of naan bread and hummus on night 2.  I was starting to realize though that despite packing light we had way too many warm clothes.  The sleeping was hot.  This was the opposite of last year where we felt a little chilly at the top of Tin Hat Mountain.

We took a break at km 40 and I evaluated the food supplies.  We had a bit too much trail mix, nuts and pepperoni left over.  In some ways this is good thing because we didn’t run out but this food has to be added to the food we are picking up at food drop #1 meaning I’m carrying too much. 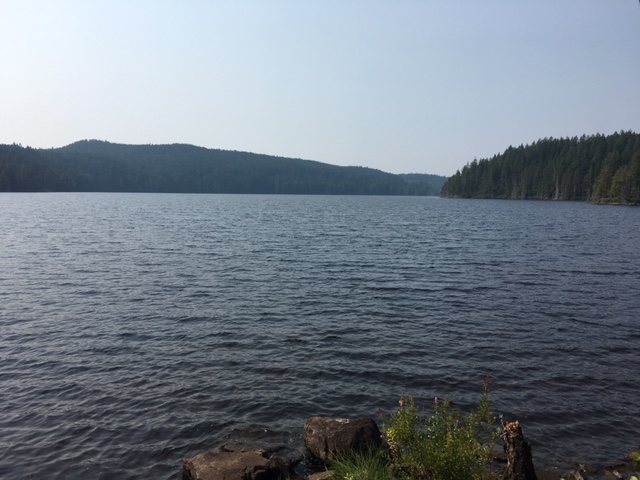 We had a really good snack at the recreation spot at Sliammon Lake.  This spot was fantastic with several of the iconic PRPAWS picnic tables, an outhouse and fire pit.  The lake is big and spectacular and it is one of many on the trail.  It’s part of what makes Powell River a fantastic outdoor destination.

After a nice break we headed on to Little Sliammon Lake.  It was a bit of a slog here through sections as the trail headed up over rocks and while it was approaching noon and we were more exposed it was starting to get hotter. 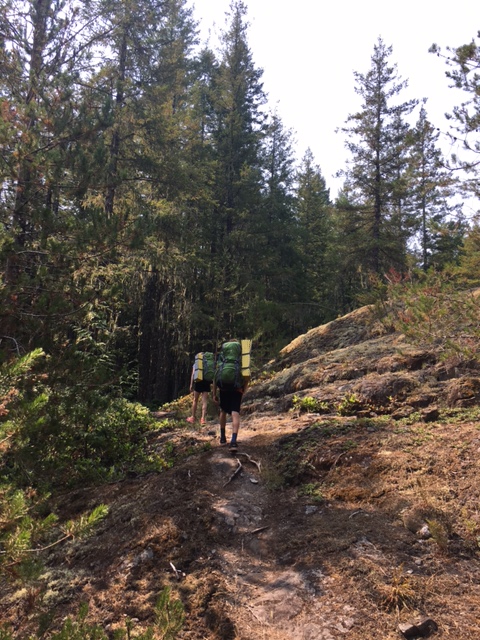 The trail was above the lake and it was a fantastic view.  It was also a good time for the kids to find giant rocks that they could hurl into the water. 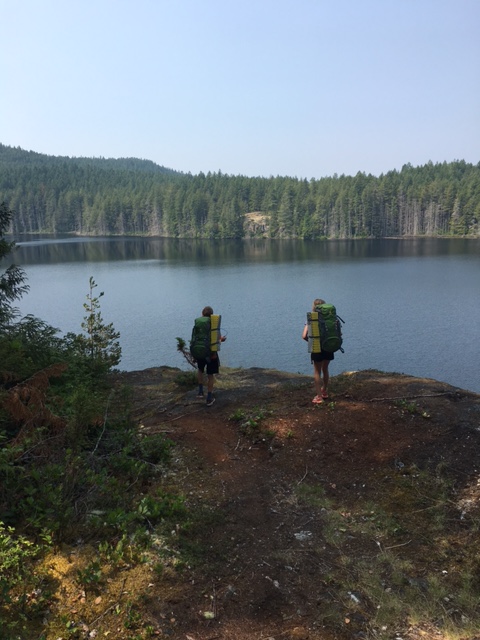 We saw a lot of snakes on the trail and there were several small screams from my daughter.  None of us love snakes.

After leaving the lake we were into a harder section of the trail.  It went through another clear cut section. 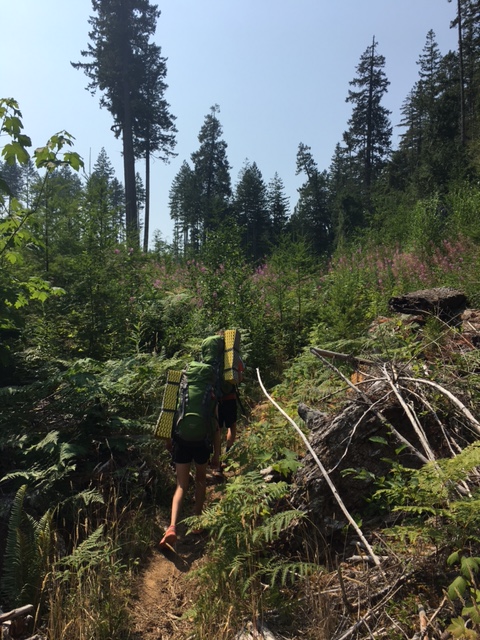 After we passed a lake with a recreation area (and a canoe that apparently you could use) we headed rather steeply up hill.  The kids were of course leading and I was assuming my head down position putting one foot in front of the other.  Unbeknownst to me there was a tree that had fallen across the trail at about 5′ 5″ high.

This was no reason to slow down for the kids.  They went right under and I didn’t even notice.  I ran straight into it.  And not just the blunt tree.  There was a broken branch sticking out.

The woods, they were alive with the loudest F-bomb those parts have heard.  It was excruciating for second and then I gathered myself, apologized for my foul mouth and we continued after the kids evaluated the mess I made to the top of my head.

I think we all have moments like this as parents.  They aren’t things we are terribly proud of but sometimes I just realize that this is all part of being a parent.  We make mistakes.

At the main lake we met the couple from Rieveley’s Hut and they were saying there was a 5 km diversion to a bluff before getting to Powell River.  From what we experienced this was not a diversion but rather part of the trail.  As it turned out for us with the heat it was one of the more difficult sections. 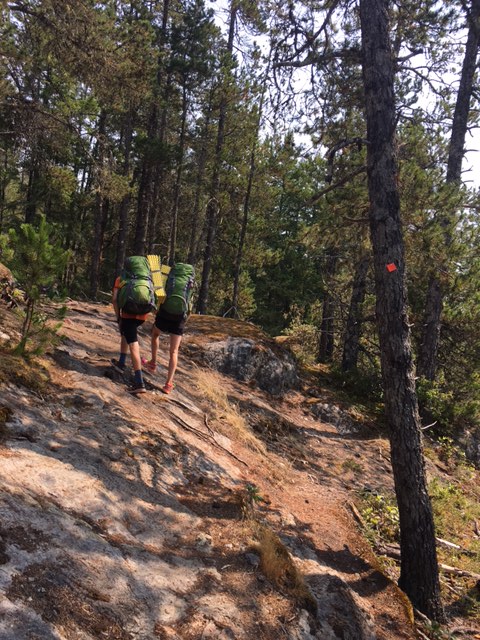 The temperature by this point was well over 30 degrees and if I had to guess it was mid-30’s.  It felt like we were in the Okanagon.   The ground was incredibly dry and the vegetation reminded me of Pincushion Mountain in Peachland, BC.

The views of Powell River and Powell Lake were quite good despite the haze in the air from the smoke. 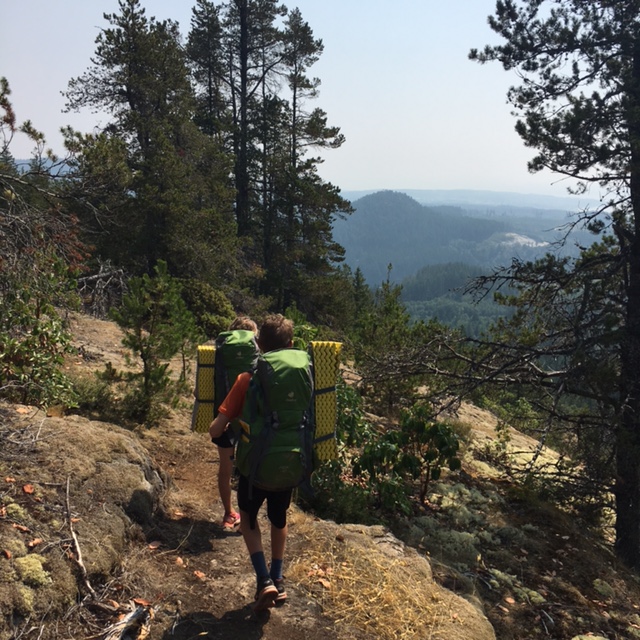 Winding our way down from the bluff into Powell River we saw several geckos.  They weren’t really afraid of us so we were able to get really close for pictures. 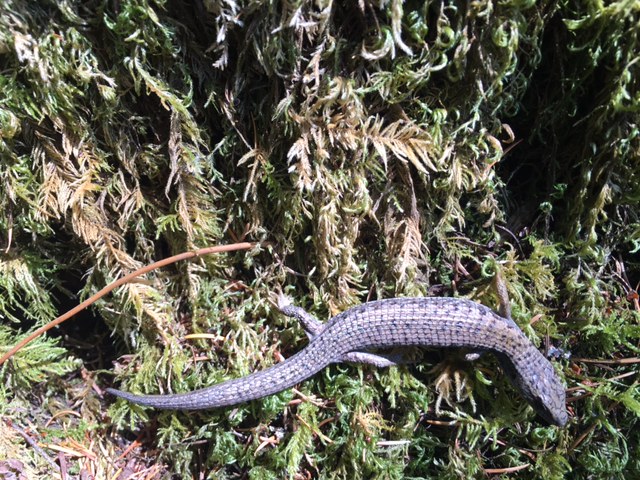 Coming in to Powell River we saw several piles of bear scat but none of it was fresh.  This was probably the first scat we’d seen on the trail.  There were more berries in this area so it’s not a surprise that there would be bears. 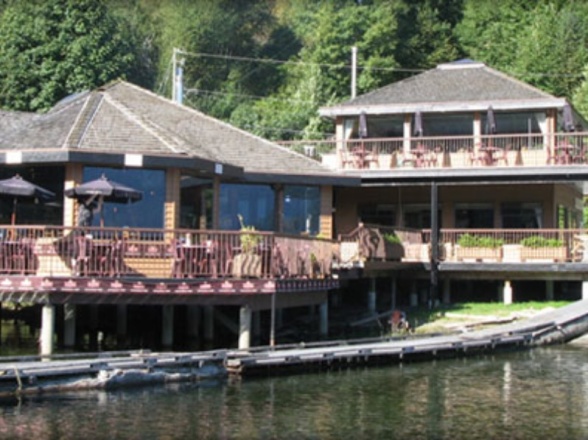 After 17 km of hiking we reached the pub and we were excited about ‘real food’.  My daughter and I both had burgers and fries while my son sampled the fish and chips but substituted with onion rings.

I was excited to get them a milkshake but that wasn’t on the menu.  They came out with something that might have been better.  It was a chocolate milk shake float with whip cream on top served in a 20 oz beer flute.

They were in heaven and while I was a wee bit jealous I sampled a local beer that was fantastic (Tin Hat) from Townsite Brewing.

The staff at the Shinglemill Pub & Bistro were awesome!  It was 230 PM when we arrived at the pub so they set us up in a quiet area where we could drop our packs and keep our smell away from everyone trying to enjoy a nice meal.  I was smart and changed my shirt about 500 feet away from the pub.

I was also able to charge my Iphone which I was running on airplane mode and using only for pictures and notes.  I bought a $10 charger before the trip and that was a great investment because I didn’t run out of charge for the entire trip.  It was nice to be back in cell service to send an update to our emergency contacts.

Note: It’s always good to file a trip plan with your emergency contacts.  In our case I shared it with 3 people.  I also carry an emergency Personal Location Beacon (PLB).  A PLB isn’t just for getting lost.  If someone gets seriously injured it’s much faster to signal for help and assist the person than to have someone hike out.

After loading the pack with the food drop I felt seriously loaded down.  I considered taking all our warm clothes and loading them back into the box.  I was torn.  We had at least 7 more nights on the trail and I didn’t want to risk a turn in the weather even though the forecast was for 28 C plus.  It would also mean driving back to Powell River after finishing to retrieve our box.  So, we kept all the clothes.

The next 6 km to Tony Point were not our favourite.  I was happy that I declined a second beer; the huge meal, combined with the extra weight, heat and the challenge of the first 6 km was enough to handle.

This section of trail coming out of Powell River is not particularly pretty.  You exit the trail by machinery and an active logging road and then you come across Mowat Bay Park.  The park itself is pretty with a nice swimming area that was popular with the hot weather. 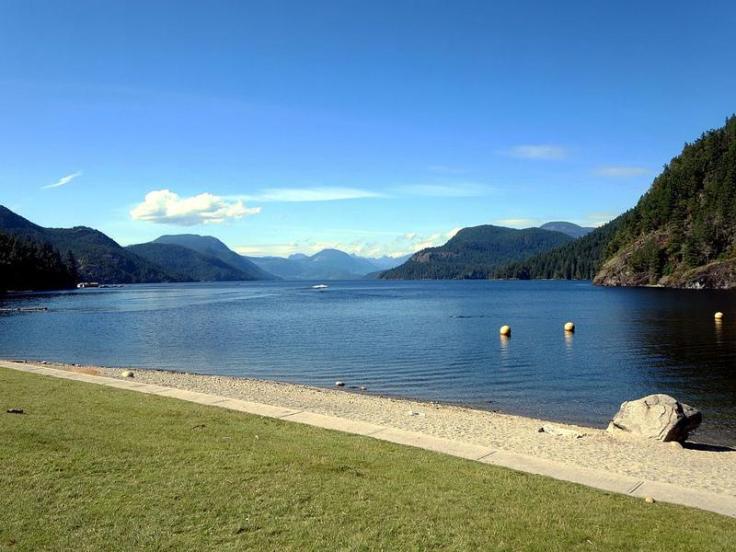 I think we just wanted to get to the destination at this point so we weren’t enjoying the journey quite as much as earlier in the day.  Finally we were hiking along Powell Lake and approaching our destination with more beautiful Arbutus Trees. 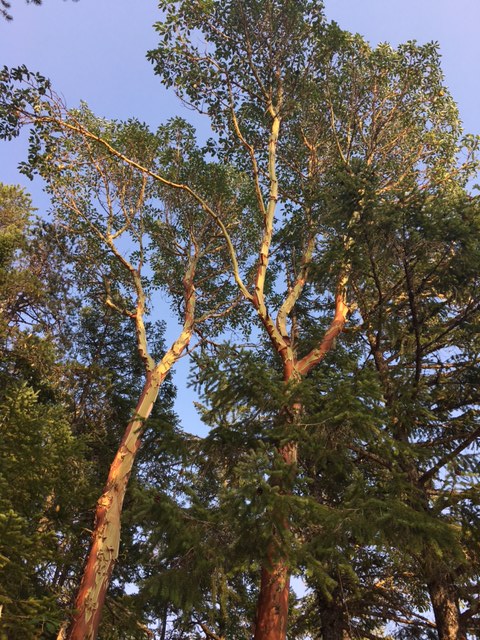 We set up our make-shift shelter which was the fly from our giant tent pegged down and hung across a rope.  My daughter got her wish to sleep in her hammock.  We went for a late dip in Powell Lake that was very refreshing after a hot day of hiking.  We were spent!   I continued to plough through my book while the kids entertained themselves around the campsite.

We also met Martin from Switzerland who came to see our site looking for a site for him and his girlfriend to camp.  We thought we had the only site and then we discovered a really cool area on the beach just south of where we pitched our tent (right by the sign for Tony Point).  We went to tell them but they had already set up on the beach just north of Tony Point.  Their site looked great as well.

As it turned out this was our only night not sleeping in a hut and that was partly our goal.  It was great to end the day with beautiful sunshine over Powell Lake.